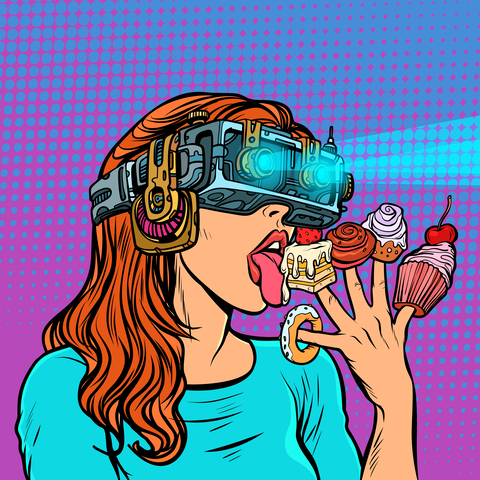 It is becoming increasingly clear that sugar has an influence on our immune system and via that route also on breast cancer. On this page we list a number of links between sugar, insulin resistance, inflammation and breast cancer.

Sugars are kryptonite to our immune system

Too many sugars really give you hassle!

Breakfast is the most important meal of the day?

Who actually came up with that and what's in that breakfast? Also check out the following:

Did you know that we all make thousands of cancer cells every day... yes really all of us.

Sounds intense, doesn't it?!
Fortunately, our immune system tracks down these deranged cells with, among other things, white blood cells. If these processes go well, there is nothing wrong.

There are 26,797 articles on Pub-Med about the relationship between sugar and cancer.

Cancer cells and inflammatory cells use a lot of energy and need fuel in the form of sugar (glucose). So someone with cancer absolutely must stay away from sugars.
See also this article in De Standaard about Belgian research: "Sugar makes cancer more aggressive“.

Insulin is a hormone that counteracts the increase in blood sugar levels after eating sugars. If the blood sugar level rises then the insulin level increases. Insulin ensures that glucose enters the cell to be burned to energy. Is the cell already satisfied then the door remains closed and your blood glucose high.
Sugars are now stored as fat for periods of scarcity.
However, what scarcity, there are no more....
So we develop obesity which is not always visible, think here of a fatty liver (viceral fat). In English this sounds even more violent: "Non-alcoholic fatty liver".
Such a person is also called a TOFI – Thin Outside Fat Inside - Thin on the outside fat on the inside".

A fatty liver can no longer perform its function of breaking down estrogens. and this leads to an estrogen dominance.

Excessive fat cells in women with an abdominal circumference of more than 80 centimeters is also responsible for the production of estrogens.
Breast cancer is usually hormone sensitive. Therefore, women with breast cancer are often given the anti-estrogen tamoxifen prescribed.

HbA1c is an abbreviation for Hemoglobin A1c. This is the red dye in the blood but the variant to which glucose is bound.

By HbA1c to measure so you can measure how much glucose there is in the blood but now comes the:

Now I hear you thinking
"I don't have diabetes.
What about insulin resistance? Or pre-diabetes?

Did you know that diabetes has a process of up to 10 years?

We can ignore these symptoms with eating snacks 😉 .

Some can skip a meal but are still insulin resistant because they use protein for fuel.

There is an exception with stress: then many people can skip a meal. Unfortunately, we often use proteins as fuel. Characteristic is that your skin becomes flabby. Think of your upper arms, the "chicken fillets" or the inside of your thighs and under your chin.

This is far from optimal because you will be eating your own building blocks.

It is important to keep your blood sugar levels and thus your insulin stable.

Women who regularly have a too high-glycemic index have twice the risk of breast cancer.

Many people depend on sugars for their energy and cannot switch to burning fat. If you can, you get so much energy, which is what I always call "The Duracell Effect".

Then I still prick my blood glucose values?

Yes you can, but this is only a snapshot. It is possible that your fasting glucose values have only come within the range just after waking up. This says nothing about your insulin sensitivity. With a good insulin sensitivity your glucose should be absorbed within 3 to 4 hours after eating.

The circle of sugar and insulin

What happens is that your cells don't let the sugars (carbohydrates) in anymore because they are already full.

Your blood sugar goes up but you get NO energy.

Then a signal goes to your brain to eat more carbohydrates. Your pancreas goes back to work making insulin, but when you get to the cell, the door is closed again...

We didn't have this problem in the past, evolutionarily we only got sugars at the end of summer when the berries were ripe and there was honey! Then you ate until you were shitty 😉 Put on a nice little bit of fat for the lean winter ahead where we use this stored fat as fuel.
Survival of the fattest.
In addition, we were physically much more active so we burned more sugars. Nowadays we mainly have a sedentary existence.

The relationship between carbohydrates and breast tumours

Italian scientists were the first to make the connection between high-glycemic carbohydrates and breast cancer. They compared 2569 women who suffered from this with 2599 healthy control subjects. They discovered that in those who regularly ate high-glycemic carbohydrates such as white bread, the risk of breast cancer was twice as high. https://www.natuurdietisten.nl/negatieve-rol-suiker-tumoren/

Do Insulin and IGF stimulate cell growth in cancer?

Barry Boyd is a Hematologist/Oncologist in Greenwich, Connecticut (USA). He graduated from Cornell University Medical College in 1979 and has over 41 years of diverse experience, particularly in hematology/oncology.
He suggests that insulin and IGF (the insulin-like growth factors) accelerate cell growth in cancer (especially breast cancer).
He also suspects that high IGF levels may negatively affect chemotherapy, making it less effective.

In his presentations, Dr. Boyd explains how the changing food environment of the late 20th and 21st centuries, through both dietary and lifestyle changes, have contributed to the epidemic of modern western cancers such as breast, colorectal and prostate.

Studies on the link between carbohydrates and cancer

His theory was tested a year later by researchers at Brigham and Women's Hospital and Harvard Medical School in Boston. They examined breast cancer risk in a group of 475 Mexican women aged 20 to 75. Women with the most carbohydrates in their diet were up to three times more likely to have cancer than those with the least carbohydrates in their diet.

The most compelling evidence was found in the American Women's Health Initiative Observational Study. Researchers followed a subgroup of 1651 post-menopausal women, half of whom suffered from breast cancer. After taking blood, the highest insulin level was found to correspond to nearly 50 percent more risk of breast cancer than the lowest. 'Women with the highest insulin levels were more than twice as likely to develop breast cancer'Marc Gunter, lead author of the research report and affiliated with the Albert Einstein College of Medicine at Yeshiva University in New York.

The sugar theory of warburg

"Cancer cells are known to have ten times as many insulin receptors as healthy cells.
Dr. Otto Warburg (1883-1970), a German biochemist was particularly concerned with cell respiration, photosynthesis, and cancer. He observed that healthy cells use oxygen to break down glucose from carbohydrates, thereby releasing energy. Cancer cells, however, get their energy from a process he called fermentation (known today as 'glycolysis' ), in which glucose provides energy without the use of oxygen."

An important contemporary supporter of Warburg is Dr. Thomas Seyfried, author of "Cancer as a Metabolic Disease".
Take a look at the video at the bottom of this page.

'The main cause of cancer is the replacement of oxygen respiration by fermentation of sugar in normal body cells,' Warburg said. He stated this in a lecture to Nobel laureates in 1966, four years before his death. Despite his Nobel Prize in Medicine, his sugar theory was largely ignored. This has recently changed. A study at the University of Arizona found that radiologists can use the degree of glycolysis as a measure to determine the stage of development of a tumor. According to them, increased breakdown of glucose is a feature common to just about all cancers. Dr. Barry Boyd - Specializing in Cancer, Nutrition & Lifesytle

Cancer cells use a lot of energy and need fuel in the form of sugar (glucose). This is used to using a PET/CT scan and a small amount of radioactive glucose (FDG) to detect cancer.

There are two hormones that cause a proliferation of cells

High insulin levels also increase estrogen levels and your insulin-like growth factor
An estrogen dominance is also responsible for other symptoms like:

What are the guide values for HbA1c?

We can quickly test a small drop of blood at an appointment to find out the HbA1c levels in your blood.
The following values for HbA1c can be used as a guideline.

An important footnote though is this:

If you have alternating hypo's and hypers, this will result in a nice HbA1c value on average. This is then also accompanied by the necessary symptoms and the thermographic patterns you see in the box below.

HbA1c is expressed in mmol/mol

The values for HbA1c can be roughly divided into the following three areas:

The correlation between the HbA1c test and thermography

You can never make a diagnosis from the result of an HbA1c test or thermography. Neither one of them provides a diagnosis.
What you can do is put the result of an HbA1c test next to the analysis of thermography and then also look for any symptoms. This kind of correlation still doesn't give a diagnosis, but it does give some good clues as to which direction to look further. Of course, to get the most complete picture possible, we need more than just pictures of just your hands or your breasts. Our wellness test is very good for this.
A good example is the following case:

Indications in a thermogram for problems with the metabolism

These are thermographic images of a person who reported suffering from carpal tunnel syndrome.
The doctor's report came back as follows:

"There is hyperthermia at the palms, wrists and thenar region and fingers of both hands which correlate with the reported Carpal Tunnel Syndrome. This thermal finding has also been associated with metabolic dysfunction. Evaluation of a panel of metabolic lab tests is recommended as metabolic syndrome and diabetes cannot be ruled out. Correlation with diabetes screening as well as rheumatological studies (ESR, ANA and Rheumatoid Factor) can be considered if clinically indicated."

"There is hyperthermia to the palms, wrists and the mouse region and fingers of both hands that correlate with the reported Carpal Tunnel Syndrome. This thermal finding is also associated with metabolic dysfunction. Evaluation of a panel of metabolic laboratory tests is recommended because metabolic syndrome and diabetes cannot be excluded. Correlation with diabetes screening and rheumatological examination (ESR, ANA and Rheumatoid Factor) may be considered if clinically indicated."

Just like a separate HbA1c test, the doctor does not give a clear diagnosis, but does provide clues for further investigation.

He says the patterns he sees in the past in addition to carpal tunnel syndrome have pointed to issues with metabolism and diabetes. This is an interesting finding that you could investigate further by correlating it with an HbA1c test. Carpal tunnel syndrome is also more common in people with diabetes and there is a link between (developing) type 2 diabetes and rheumatoid arthritis.
He went on to say that it would be wise to also investigate factors in the blood dealing with rheumatism if there's any reason to.

This is a long interview by one of our Youtube favorites Dr. Eric Berg with Dr Thomas Seyfield.
Very worthwhile!

That's what cancer is according to Dr. Thomas Seyfried.
According to him, cancer cells depend on two very specific substances: Sugar and Glutamine to generate energy with fermentation. Exactly as described above!