We've been saying it for a while now but recently we came across a number of videos on youtube about vitamin K2. Professor Vermeer from the University of Maastricht gives a very enthusiastic account of Vitamin K2. It is just not called a miracle cure.

The first clip is from the Limburg broadcasting company L1, from the programme Limburg laat:

And RTL7 also paid attention to it:

The Vita-K meter of Professor Vermeer

To be able to say something about the condition of the blood vessels and the vitamin K in the body, Cees Vermeer founded a company to develop simple measurements: the Vita-K meter. 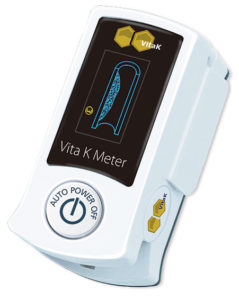 We have purchased this device and can therefore offer the following:

Free Vita-K measurement with every consultation of Thermography Amsterdam

Want to know more about the Vita-K measurement and what it actually measures?

The average intake of vitamin K2-which we get from our diet-has declined significantly over the past 50 years.

had significantly less calcium in their blood vessels.

It was concluded that about 90% of the participants were deficient in vitamin K2.

Vitamin K2 is beneficial for:

An important function of vitamin K is the activation of the Gla proteins, which together with vitamin D regulate the calcium balance and calcification of soft tissues such as the breasts and osteoporosis.  counteracts.

Through the diet, we get vitamin K1 in particular from green leafy vegetables.

The function of vitamin K is to activate GLA protein, the inhibitor of calcium deposition in soft tissue.

Vitamin K2 is a group of menaquinones produced by certain bacteria and found in limited amounts in meat, dairy and eggs.

Vitamins K2 is transported with LDL (just like vitamin E).

Vitamin K deficiencies, in addition to not eating, can be caused by:

Vitamin D stimulates K2 and increases the availability of calcium.

BE CAREFUL IF YOU'RE ON BLOOD THINNERS.

Then K2 should only be used under medical supervision.

There are many studies on vitamin K2. Here are some:

Vitamin K status and bone mass in women with and without aortic atherosclerosis: a population-based study

Dietary Reference Intakes for vitamins A and K, iron, iodine, chromium, copper, manganese, molybdenum, zinc, and other potentially beneficial trace elements such as boron to determine the roles, if any, they play in health.